His installation 'The Nameless' consisted of manipulated black beads. Draped and pinned, they covered the walls with 3D drawings depicting and referencing tales from multiple sources.

"Hew Locke first began to incorporate strings of beads into his work after seeing the frayed tapestries on the walls of once-stately European homes. Their dangling threads especially interested him. “In [my] wall drawings, the beads act as equivalents to broken threads,”
Locke uses (beads) to create lines, rather than surfaces or volumes. ... Strings of beads hang down, like trails of dripping paint."
Source: Guyana Modern 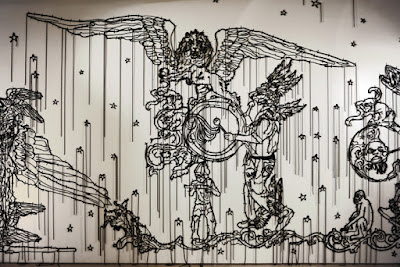 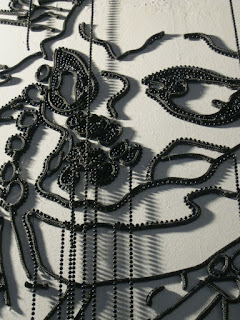 Installation time-lapse of 'The Nameless' (2010), 'a processional walk of unlikely characters made of cord and plastic beads.'


'The finale of the exhibition presents a flotilla of customised boats, comprised of a mixture of new ships and those featured in the installation On the Tethys Sea (2017), first shown in the Diaspora Pavilion in Venice. Suspended from the gallery ceiling, intricate decorations, talismans and greenery adorn these empty vessels – with crew and passengers as absent presences – immersing visitors in a submarine environment, at once dreamlike and poignant.'
They also hold personal significance for the artist...

“Here’s the thing: Guyana means ‘land of many waters’ – you are constantly aware of boats. I went to Guyana as a five-year-old kid on a boat. I came back here on a boat. So many things, good and bad, travel by sea.” 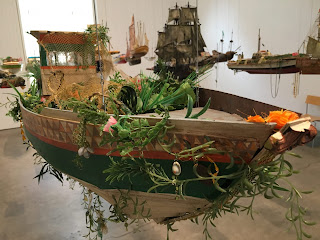 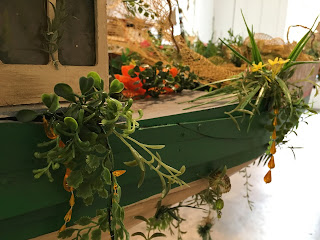