Petrol rainbows have fascinated since I was a kid. I seemed to see most of them walking to and from school. This is the first time I've stood and looked at one for a while.

The petrol, rain mix made its own drawing as I watched.
A video might have been a better idea! 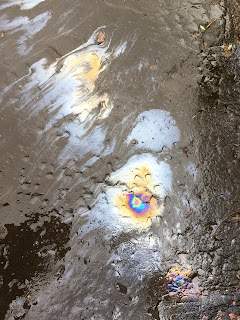 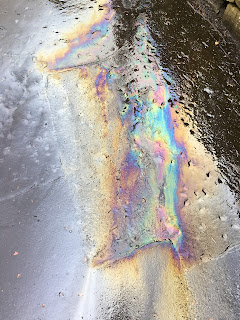 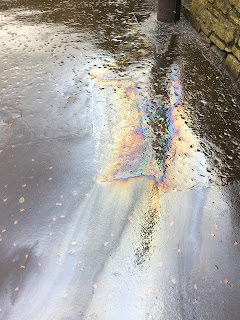 It's only now that I've ever thought to find out why this phenomenon occurs:

"This is because the oil spreads out to form a very thin film on the surface of the water, but of varying thickness. In some places it is literally a molecule thick, whilst in other places it is much thicker. When light passes through the oil some of it is reflected back off the different layers of oil, whilst some carries on and is reflected off the surface of the water lying below. Because the light waves have now travelled different distances before being reflected they mix together producing a spectrum of colours - because the thickness of the oil layer varies. ...the light spectrum occurs because, having travelled slightly different distances, some of the waves are now 'out of phase' and cancel each other out, producing dark spots, whilst others add together, producing lighter spots." source

Iridescence (also known as goniochromism) is the phenomenon of certain surfaces that appear to gradually change colour as the angle of view or the angle of illumination changes. Examples of iridescence include soap bubbles, butterfly wings and sea shells, as well as certain minerals. wikipedia 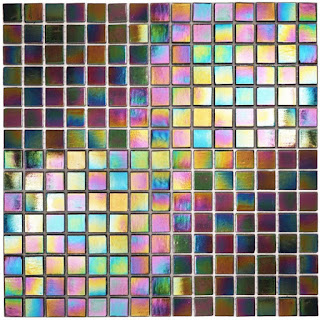 SaveSave
Posted by Helen Birch at 19:01